with the recognition of »Prometeus of science for excellence in communication« for life achievements.

On Tuesday, 28 January, the Slovenian Science Foundation has delivered the yearly awards and recognitions to individuals and organisations that are active in the field of promoting science and science communication in Slovenia. 8ECM Organizing Committee Chair and UP FAMNIT Head of Department of Information Sciences and Technologies, Prof. Tomaž Pisanski, PhD was awarded with the recognition of »Prometeus of science for excellence in communication« for life achievements.

Prof. Tomaž Pisanski is an internationally known researcher working in the field of discrete and computational mathematics, with applications in natural sciences, engineering and social sciences. He is one of the pioneers of topological graph theory in the world and the founder of the world-renowned Slovenian school of graph theory. His most important contribution to the global scientific community is based on the use of discrete mathematics methods in natural sciences and technology. His contribution to the development of the representations of graphs, which is used in mathematics as well as in chemistry, biology and other sciences, is also remarkable. Thanks to him, Slovenian science in these fields is recognized and appreciated globally, and his intensive cooperation with researchers and research institutions from all over the world, as well as his membership in numerous scientific organizations and associations abroad, has had a strong influence on the development of Slovenian science for decades.

Under the guidance of Prof. Pisanski the University of Primorska, in cooperation with other institutions in the field of mathematics in Slovenia, successfully applied for the organization of the 8th European Congress of Mathematics. The Congress will be held in Portorož in 2020 and it will be the most important scientific event in Slovenia. His contribution to the communication of science includes also the work as editor in many scientific journals. He is one of the two founding members and editor-in-chief of the international mathematical journal Ars Mathematica Contemporanea - AMC.

Prof. Tomaž Pisanski demonstrates excellence in communication in science, both within the international scientific and professional public and beyond, as he has also participated in many programs on popularization of science for a wider and target audience. Through lectures and workshops, as well as mentoring to many young scientists, he passed on his knowledge, experience and views on the work and role of the scientist in modern society, as well as his passion for scientific research, thus inspiring many younger researchers to work in science. 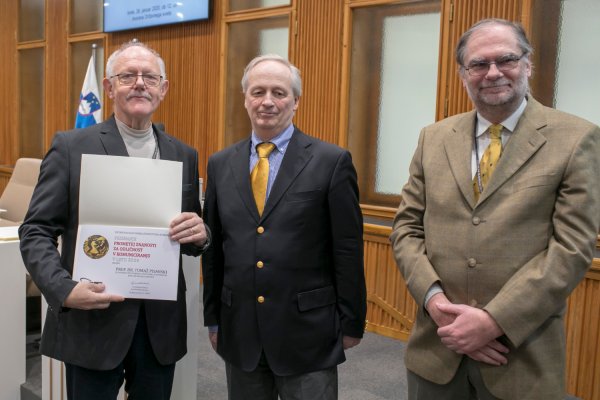 We congratulate all our researchers and employees for their important work on the field of popularisation of science!