Otto Neugebauer Prize to be Awarded at The 8ECM

for the History of Mathematics

The Otto Neugebauer prize is to be awarded in a dedicated ceremony at the 8ECM. Established by the EMS in 2012, the prize is given for “highly original and influential work in the field of history of mathematics that enhances our understanding of either the development of mathematics or a particular mathematical subject in any period and in any geographical region.”

This year’s Prize committee is chaired by Professor Eberhard Knobloch, mathematician and historian of science and mathematics. Knobloch is a professor emeritus of History of Science and Technology at TU Berlin and the Berlin-Brandenburg Academy of Sciences and Humanities. His research interests include probability theory and infinitesimal mathematics, Renaissance technology, cosmologies and the philosophy of mathematics. During his long and distinguished career, he has directed numerous projects for the German Research Foundation (DFG), contributed in several capacities to the Leibniz Edition and Bernoulli Edition, and acted as co-editor for monographs in the Science Network. Historical Studies series (Springer Basel). 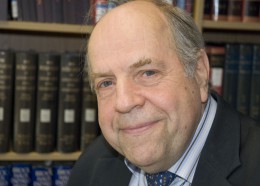 Details of the winner of the Otto Neugebauer prize will be published on our website following the official announcement by the EMS. This prize is one of several EMS awards to be conferred at the 8ECM, which also include the Felix Klein prize and up to ten EMS prizes for young researchers. The recipients will be invited to present their work at the 8ECM. Nominations are now closed, but you can view information on all the EMS prizes on our website at www.8ecm.si/about-8ecm/prizes.

We look forward to welcoming Professor Knobloch and the Otto Neugebauer prize winner at the 8ECM!